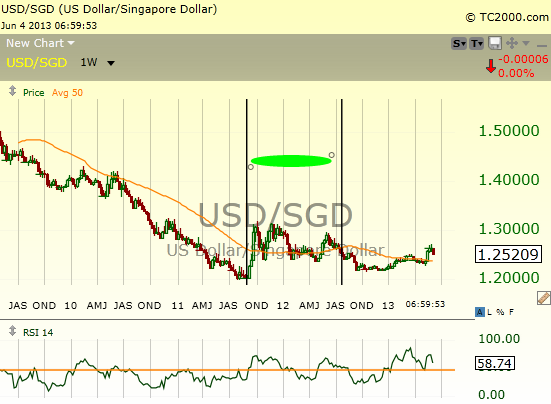 The RSI indicator is a technical oscillator that is mimicking the price to a certain degree.

However, it does not replace the price.  It is an essential technical trading instrument but one should avoid

trading the indicator instead of the price.

To use it more accurately, one must recognize that when the RSI crosses above the 50 level, the price will also cross the moving average 50 (either SMA or EMA).  When the oscillator reaches the overbought zone, it indicates that the price has deviated away from the moving period fifty and has reached a resistance level (often on the edge of the upper band Bollinger (50,2)).  On the other hand, an oversold RSI usually corresponds to the price that has deviated from the moving average 50; down to the lower Bollinger band (50,2) or at least down to a support level.  The overbought RSI zone is often near the upper band but the oversold zone is often on or near the lower Bollinger (50,2).

To use the RSI indicator, traders must first grasp both its anatomy and physiology.  In this instance the moving average represents the dynamic fair value (not the static or fundamental true value).

According to our RSI observations, after a deviation from its dynamic fair value (moving average 50), the price frequently returns to the mean.  It is vital to understand that if the intrinsic value is dynamically increasing or decreasing (trending phase) and both market sentiment and patterns are not balanced (predominantly bullish or bearish), the financial instrument (price) will not return to its fair value straight away but only after the market sentiment has substantially changed or the asset is more than five times its core value.

Traders and investors must always check the fundamentals at Yahoo finance or Google finance to avoid being purely technical or show total disrespect to other market participants.  Most oscillators such as the relative strength index (RSI) or the commodity channel index (CCI indicator) are very useful during balanced market phases.

One should never buy (or sell) just because the oscillator is oversold (or overbought).  Please check our RSI indicator to learn more about how to use the relative strength index.

Return to the top of the page