A chart is showing a bullish 61.8% Fibonacci retracement at a green 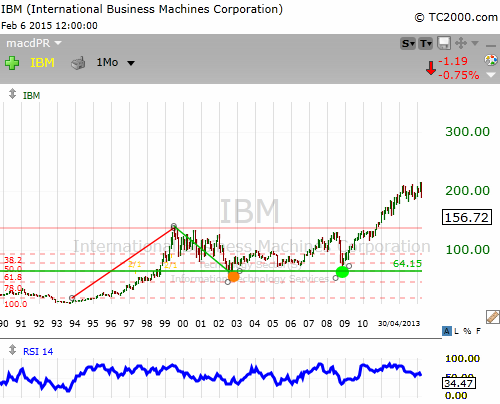 A chart that is exhibiting a bearish 50% Fibonacci retracement

at a red horizontal line.  Notice also that the price has displayed a

lower high.  It has also fallen below the bullish trend line,

and was retesting it on the edge.  Nice one. 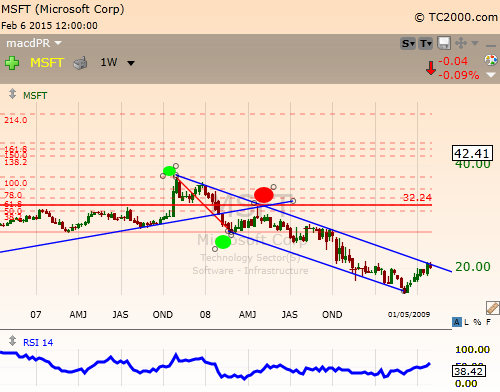 Bullish retracements are accentuated in a ascending channel, yet bearish ones

emerge in a declining channel.  The most popular Fibonacci retracements are

Frequently, Fibonacci retracements are superficial pullbacks or rallies. They

This chart is illustrating a 38.2% Fibonacci retracement with a declining trading volume.

bullish movement under a huge volume.  A bullish trade setup is in place.  One will now

apply the trading drill and triangle like a pro. 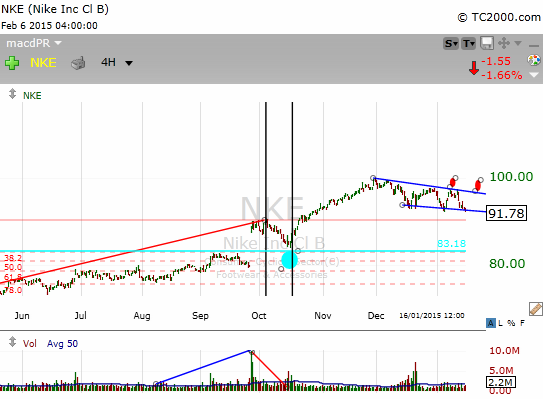 One should be suspicious about Fibonacci retracements under huge

volume stocks trading except during the corrective stage of an

Dealers generally assume that a Fibonacci retracement should constantly be

simplistic or a neat pullback or rally.  Still, at times they are complex. There are
Zigzag or double and triple zigzags, contracting or expanding triangles plus

familiar with the indicated untidy settings.

This chart is illustrating a complex 38.2% Fibonacci retracement in the form of 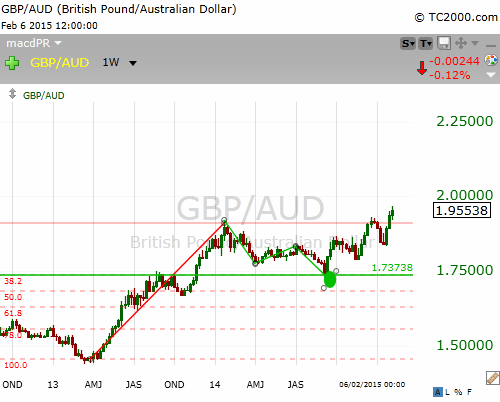 At Any Time a Fibonacci retracement obliterate the preceding impulsive

move; it is termed total or 100% retracement.  That retracement often

times happens due to financials as the price returns to a cycle point. 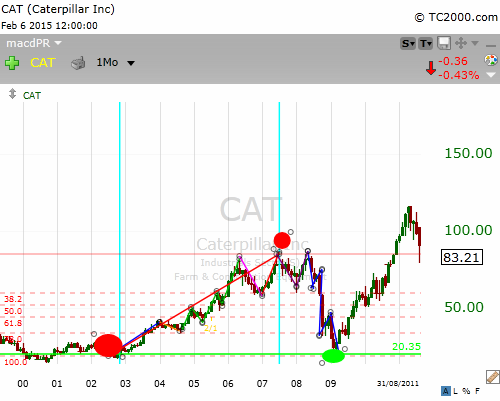 perform the Google finance acid test or a thorough fundamental analysis. This permits

Though, many traders avail themselves of those Fibonacci retracements like

magical support or resistance regions, they are not.  One should wholly accept

them together with the trading drill and triangle.

price cut are oversold.  On the other hand, the indicated which surge to 78.6%

Fibonacci retracement after an initial bearish price move are overbought if

fundamentals are weak or deteriorating.  Nearly All hedge funds and additional

From a technical analysis viewpoint, there are three confirmations.

During an uptrend,
1/ price should be in a rising channel,
2/ price should breakout of a resistance,
3/ price must confirm the resistance as a support.
One will also align the technical analysis with the financials.

Title:  How To Master The 38 2 Fibonacci retracement

Description:  Learn and master how to trade the 38.2% Fibonacci

retracement with a greater success.  Follow the correct steps to

During a downtrend
1/ price ought to be in a declining channel,
2/ price must decline below a support level,
3/ the support must change into a resistance.

place in it.  This swell in trading further signals the start of a new trend

if both fundamentals and market conditions are recovering or worsening conjointly.

After the motive wave, asset many times retraces into the sweet spot band.

responded to the invitation to buy, and the stock began a new trend.  Note that the stock

will continue to fall if the fundamentals and market environment were deteriorating.

One ought to combine the technical analysis with a thorough due diligence. 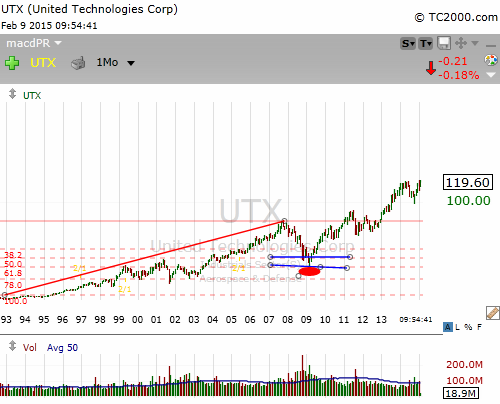 clever bearish traders or investors will stay away.

their market share are tough to sell.  If the stock drops into the 50% Fibonacci

The 50% Fibonacci retracement is also a Psychological Price Level or PPL.  It splits the

market into two territories.  Bullish above and bearish below. For this reason,

has inadequate or degrading financials.

Description:   A trading method or strategy that combines two Fibonacci

veteran of the PPL trading.  Note that one can not achieve profitable trades if

one is overlooking the fundamentals.

Although, bullish traders have the upper hand at any time the asset price is

above the PPL, bearish traders will not delay to defy the classic technical

traders if the financials do not align.  The inverse is also correct below it.
This event is natural in the Commodity markets.  In fact, the 50% Fibonacci

retracement trading is widespread in this market.

Be aware that this Fibonacci retracement is below the 50% in an uptrend, as

a result in the bearish territory.  In a bearish trend, it is in the bullish band.

first Elliott wave to grab the third wave. In this occurrence, they will set their stop loss

should not eliminate the 1st wave.  Technical traders should apply market geometry

The second projected channel is in red colour.  The red horizontal line is at 61.8%.

See also the surge in trading volume at this hot spot trading zone.  A beautiful trade

setup for TSTW SYS 008 traders is in place. 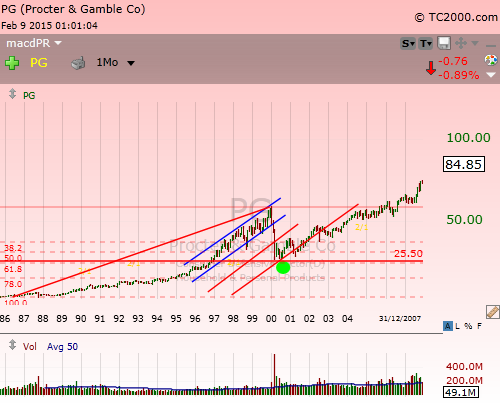 As always if one recognizes a high probability trade, one will invariably apply the

Typically, the Elliott wave corrective phase customarily leads the asset into the 78.6%

Fibonacci retracement trading zone.  Theoretically, it is an oversold area after a bullish cycle

The zone of 78.6% is overbought after bearish market cycles if the fundamentals have

not changed.  If an asset is in the 78.6 zone but has passed Google finance

acid test (strong financials), most smart investors will purchase it.  On the other

hand, intelligent market participants will exchange assets that have failed the

See the chart below

A bullish trend started in 1983, but became unsustainable in 2000

because of the bearish environment (due to the 2000 tech-bubble).

An overdue correction began with vengence, and the asset dropped to

recognized that McDonalds stock was fundamentally oversold.  The frenzy

The future will tell.  One thing is certain, after a prolonged trend

there will be a healthy correction.  It may be delayed, but it is vital for 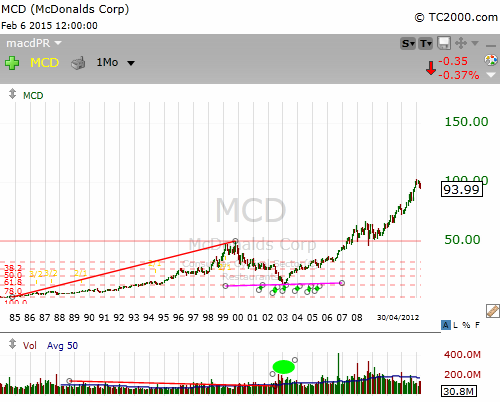 Traders who understand Fibonacci patterns such as bat or butterfly

patterns are familiar with the indicated level.  Traders also described

the present patterns as harmonic patterns on account of the harmonious

correlation between fibonacci retracements that create them.  Those are also

and investors utilize them to anticipate or time the financial market.

patterns to improve their decisions.  Indeed, if one wants to become a

Fibonacci retracement trader, one will learn these patterns because they

In all cases, one will use each Fibonacci retracement in conjunction with